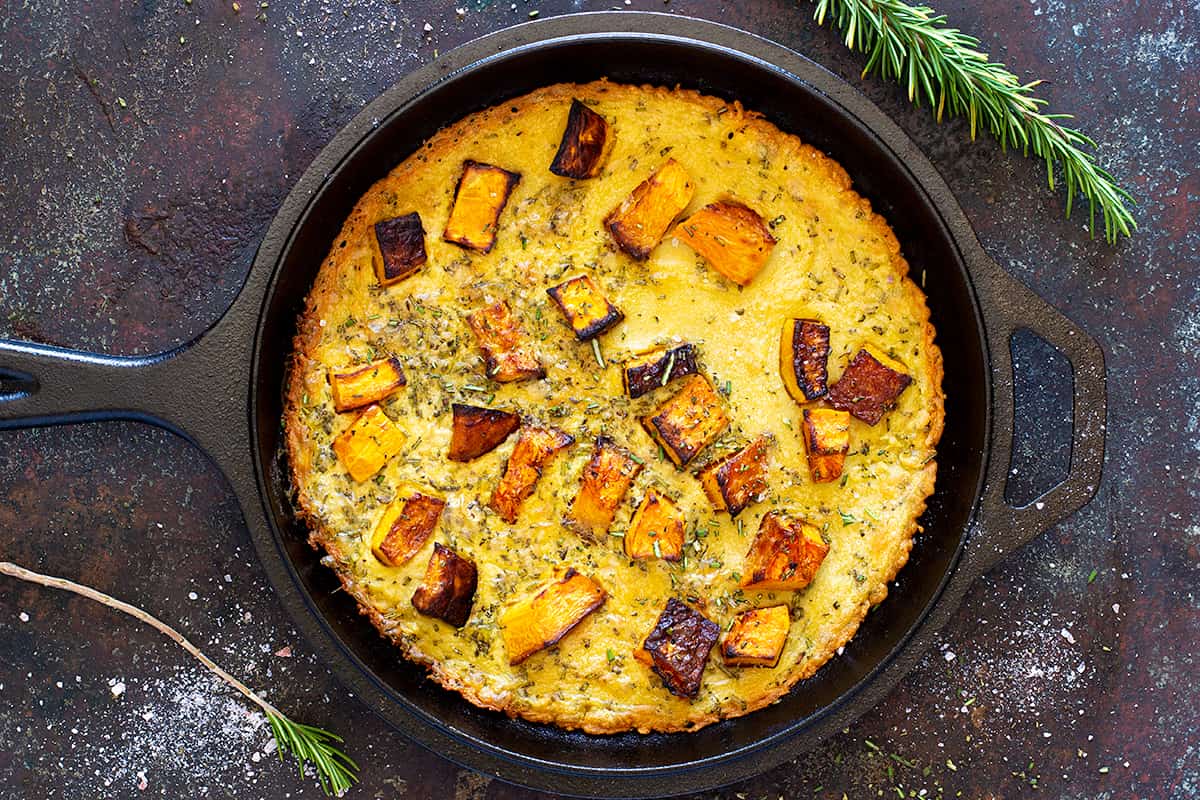 Dameon and I just recently went to a restaurant in Redcliffe called La Lanterna serving really traditional Italian food. On the menu was Farinata, which I had not had in so long! We ordered two options; one topped with sausage and slow cooked onion and one with pumpkin and rosemary. Suffice to say they were an absolute taste sensation and an inspiration for today’s recipe post, Farinata w Pumpkin & Rosemary. Farinata is obviously not my creation. Farinata has its origins in Italy. There is a really interesting back-story to Farinata. It is said Roman soldiers would mix besan flour (farina di ceci) with water and let it bake in their hot shields in the sun. Farinata is legend to have its initial origins in 1284 when Genoa soldiers defeated Pisa. The Genoa ships hit a storm and their goods of chickpea flour and olive oil spilled over mixing with the seawater. Some ate it this way like porridge while others refused to eat the pasty slop. The mix consequently was left and baked in the bowls under the sun creating a rudimentary farinata that was so much more palatable than the porridge mix created by the original ship spill. 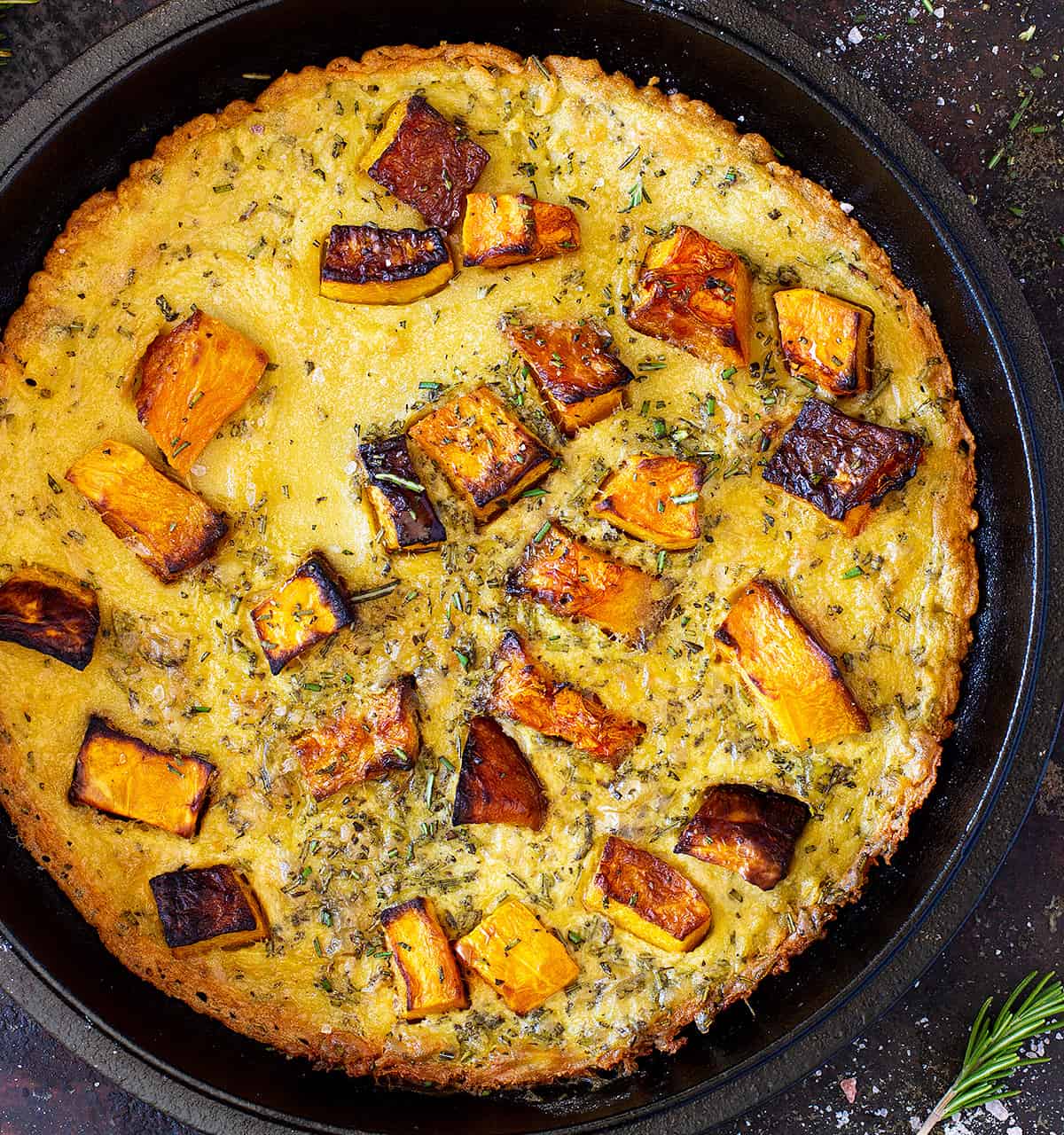 Whether this legend is true or not is not really of concern to me, I’m just a sucker for a really cool story. What I am more passionate about is how this in eaten. Farinata is best consumed as a starter to a meal or even a light snack. It is meant to be enjoyed in its simplicity and not piled high with toppings like a bastardised Australian style pizza (put pineapple and ham on this and I’ll kill you). This recipe is a celebration of enjoying simplistic quality ingredients.

The reason the Farinata is left for hours to sit, or even overnight, is to allow the flour to take up the liquid and become more of a lighter batter when baked. It also allows the release of some of the sugars (oligosaccharides) from the besan flour to rise to the top, which can be scooped off and discarded to reduce the gassy flow through from eating a lot of legumes. An important step when you are feeding your Farinata to your husband.  Some of you who are a little sensitive to legumes might find you can handle this recipe if you include this step. 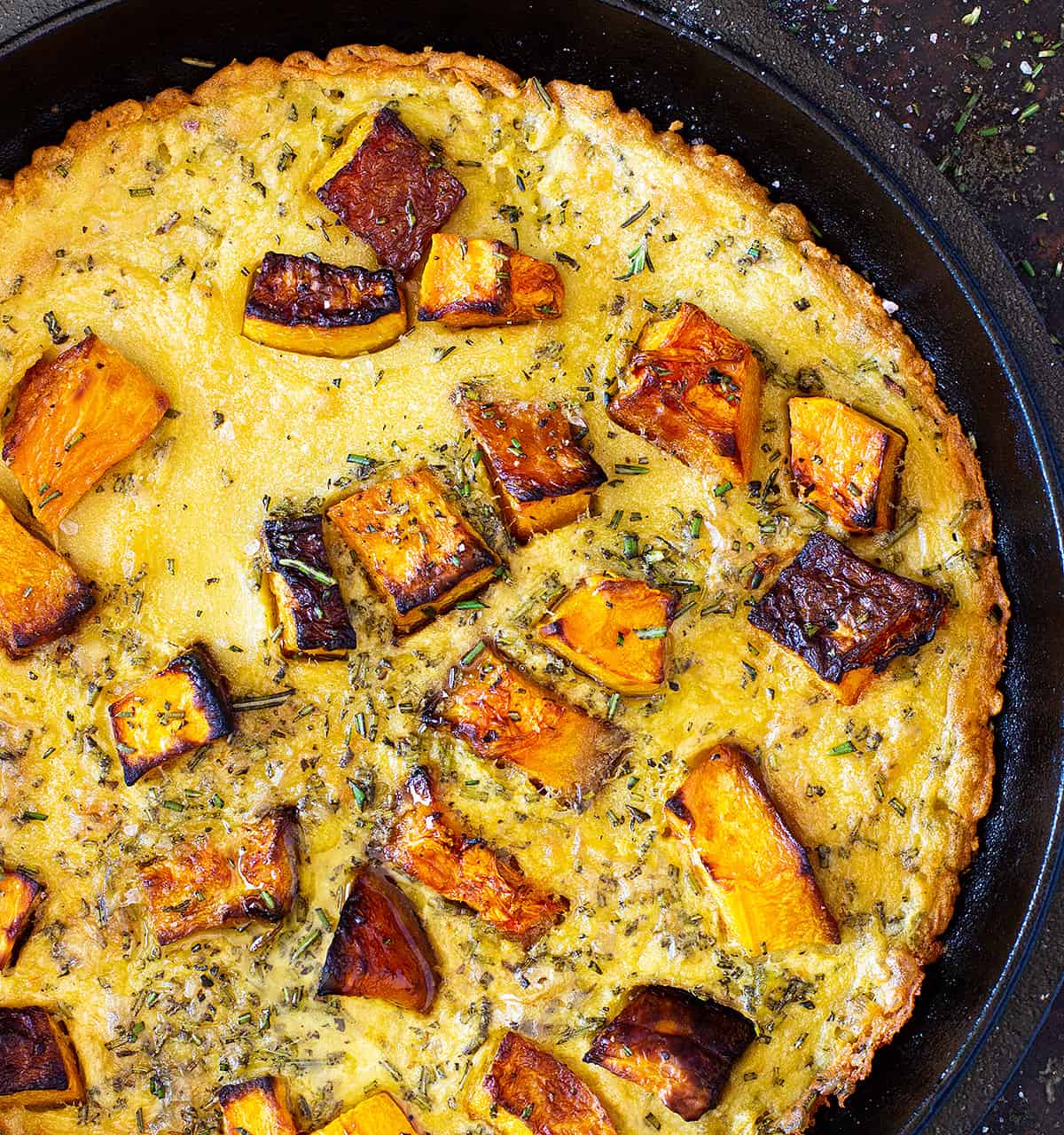 Oligosaccharides provide a high level of fuel for your microbiome, as a large amount of their make up is not digestible in the small intestinal tract. Instead they provide fermentable fuel in the lower bowel for bacteria, which is why they are often referred to as prebiotics.  If foods like legumes, garlic, artichokes and onions send your gut into a tail spin then it’s a good sign that these foods are fuelling an overgrowth of more ‘adverse’ bacteria, either within the lower bowel or the small intestinal tract if they have happened to migrate there (as seen with SIBO). Avoiding these foods long term is not the answer, dealing with the underlying cause is. No one deserves to live a life devoid of Farinata. Especially Farinata w Pumpkin & Rosemary! 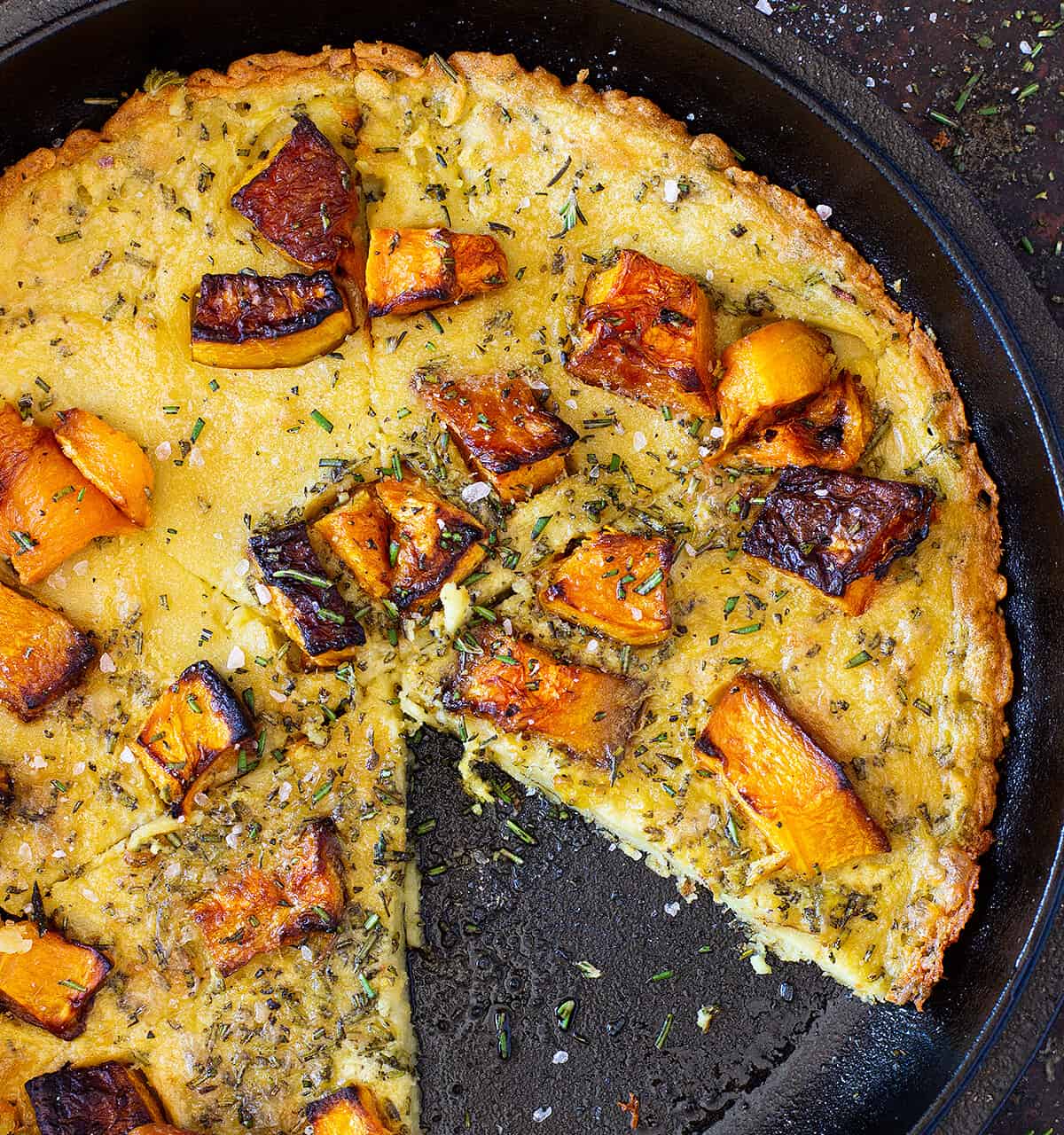 If this sounds like you, then you need to contact the JCN Clinic here and get your gut health sorted, otherwise, if your gut is tip top when it comes to consumption of legumes then I implore you to make this Farinata next time you are up for a stint in the kitchen, as its truly rewarding.

Cut pumpkin into approximately 2cm cubes. Place in a baking tray and toss with a generous splash of extra virgin olive oil and season well. Place in the oven for 30 minutes and roast till just tender. Remove and set aside.

Place the besan flour in a bowl and make a well in the centre. Add the water and whisk well removing any lumps. Cover the bowl with a plate to seal the top and set aside at room temperature for at least 4 hours (or overnight in fridge).

20 – 30 minutes prior to cooking preheat your oven to 225c fan-forced and place a oven proof round skillet pan in to heat.

After resting the farinata batter, remove the plate from the top of the bowl and skim off any of the foam tht has formed there (this will help keep the gas production down by your friendly gut microbes). Add in 1 tablespoon of the extra virgin olive oil, 1 teaspoon of the chopped rosemary and the sea salt and whisk through.

Take the baking pan out of the oven very carefully using thick oven mits and then add in the remaining extra virgin olive oil. Swirl this around the pan, it should smoke a little which is fine. Now super carefully pour the farinata batter into the hot pan allowing it to dispurse evenly. Top with the pumpkin cubes and finish with the remaining rosemary. Place back in the oven for 10 – 12 minutes until the farinata is golden all over and crisp around the edges.

Remove from the oven and slice into quarters. Serve immediately dressed liberally with more salt, drizzle of extra virgin olive oil and any left over chopped rosemary.

Do you keep the heat at 225 when also cooking the Farinata? Or should it be lowered, as it’s obviously a high temperature.

Hi Andri, you keep the temperature up at 225c for the cooking of the farinata – it’s like a pizza, it loves the super high heat! xx

Approximately what size is this skillet please? I have two, but thinking if I use the biggest one then it may turn out too thin… Thanks!

Ignore my last comment. Just mage this for breakfast, in the smaller of my two skillets (good call) and it was delicious! I only wish I made more! I am definitely doing this again. Love how it goes crusty around tube edges but soft in the middle.

Looks like you have it sorted! So pleased you enjoyed for breakfast – best crispy outside texture hey! 🙂

You will love it! It’s so good!

Hi Jess, I made this for dinner tonight and it was fantastic. Thanks for sharing. I’ll be making it again soon x

So pleased to hear Lizzie! It’s one of our favourites too!! xo

Hello! Besan flour can be substitute by chickpea flour?