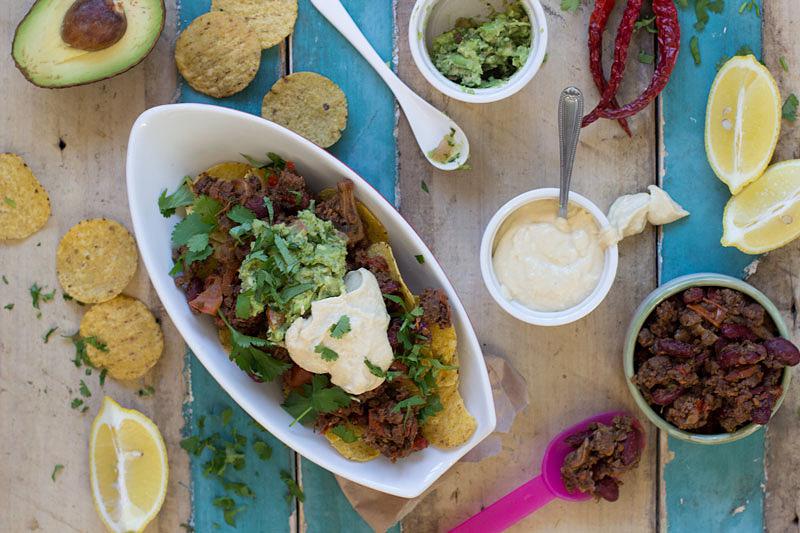 Everyone loves nachos. I don’t think I have met anyone to this day who doesn’t like nachos. Nachos became part of my repertoire in my years at uni (studying visual arts) when I was first out of high school. In these days I followed a vegan diet; not a well balanced one mind you, as I was not a nutritionist, nor had any idea of what a balanced meal looked like even if it had bit me on the behind.

Together my housemates and I devised ways to make tasty vegan nachos. I think we liked it so much because besides the fact it was so delicious, it was in hindsight also a balanced vegan meal that left us feeling satisfied. Not that we had any clue of the later. These days I have dropped the vegan diet (or any ‘diet’ as such) and adopted a more balanced approach. This includes enjoying all types of foods along with some good old nachos. My nachos today have remained dairy free, however they do now include some organic lamb from our local butcher.

Nachos are generally known for being an unhealthy meal. Like any meal however, they can be adapted to be nutritious, yet still delicious. Instead of nachos laden with lashings of cheese and sour cream, these nachos get their creamy kick from fresh guacamole. To help this creaminess along and bring more of a saucy ooze to the party, hummus is added too which compliments the creamy avocados perfectly. 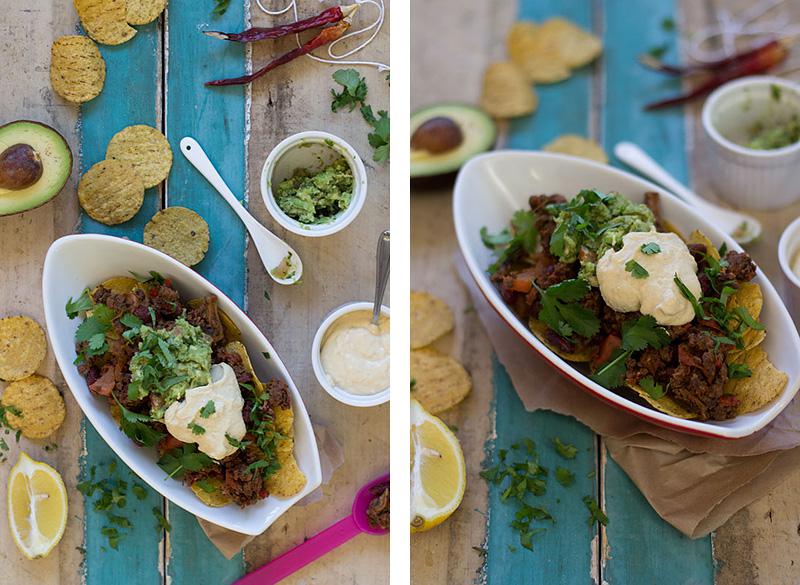 Serving these nachos is also where the healthy balance comes in. You only need a handful of the organic, stone ground corn chips. They provide a medium for the gorgeous mince and beans sauce along with the delicious toppings. Going overboard with the chips with not enough toppings results in a carb dominant meal without enough fresh vegetables and protein.

Lastly, feel free to adapt these nachos as you like. Make them mince based without the legumes or make them vegetarian without the mince. Leave out the mince and swap it for some chicken. The choice is yours. At the end of the day this is a tasty, crowd pleasing meal that keeps even kids happy.

In a large, heavy based saucepan heat a good splash of olive oil to a medium heat. Add onion and mushrooms and cook through till the onions are transparent and the mushrooms start to go a golden brown. Add the mince and the garlic along with the chilli, anchovy and celery seeds. Stir well and let the mince cook through. Continue cooking the mince like this for a good 10 minutes. You want to develop some browned edges to the meat and get rid of the liquids (this helps develop the flavours).

Now add the capsicum along with the tomato paste, sumac, thyme and oregano. Stir through and let this cook through until all the liquid has evaportated again and the mince is browning further. Season with salt and pepper.

Next add the kidney beans. Mix through, again allowing the liquid to be taken up then turn down to a low heat. Cover saucepan with its lid and allow to sit and cook for another 5 – 10 minutes.

While the mince and beans are cooking, make your guacamole. Simply mash the avocado and stir through the lemon juice, tomato, coriander and salt and pepper. Set aside.

To serve. Place a handful of organic corn chips on each plate. Top the corn chips with mince and beans mixture, then a good spoonful each of guacomole and hummus. Finish with a liberally sprinkling of coriander. 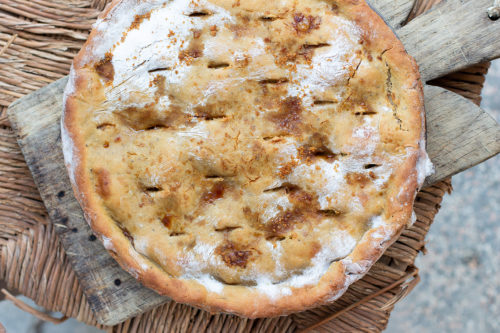 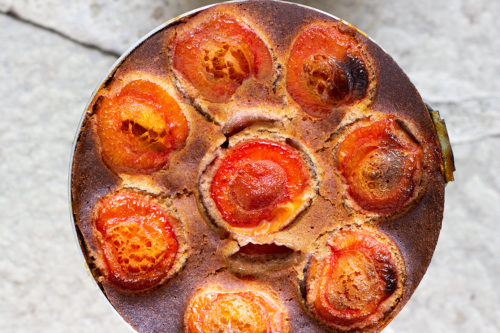