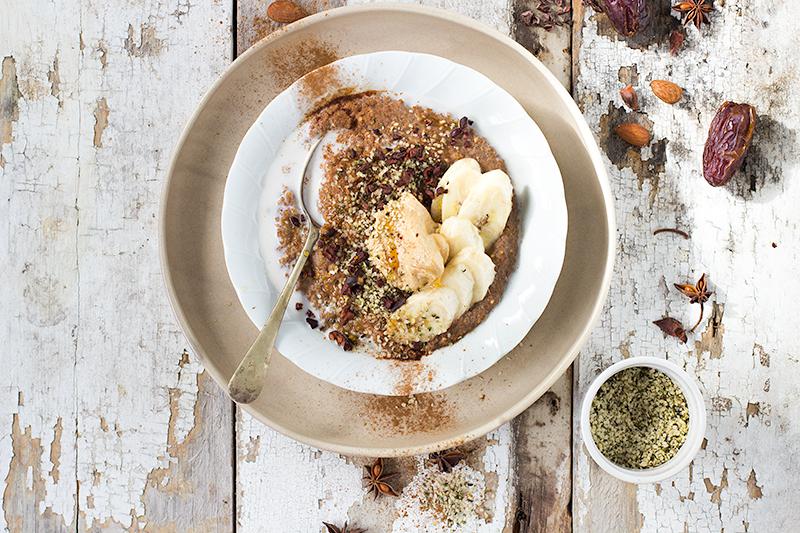 Without being one of those people who goes on and on about the weather, it has finally changed to a cooler climate here in Brisbane. Its perfectly wonderful, I’m so happy to not be sporting a constant sweat moustache. Plus, the even cooler nights mean its ‘spooning temperature’ again. When the nights are warm your partner is banished to the other side of the bed, but the brisker evenings bring back the marvellous comfort of the bed time spoon. 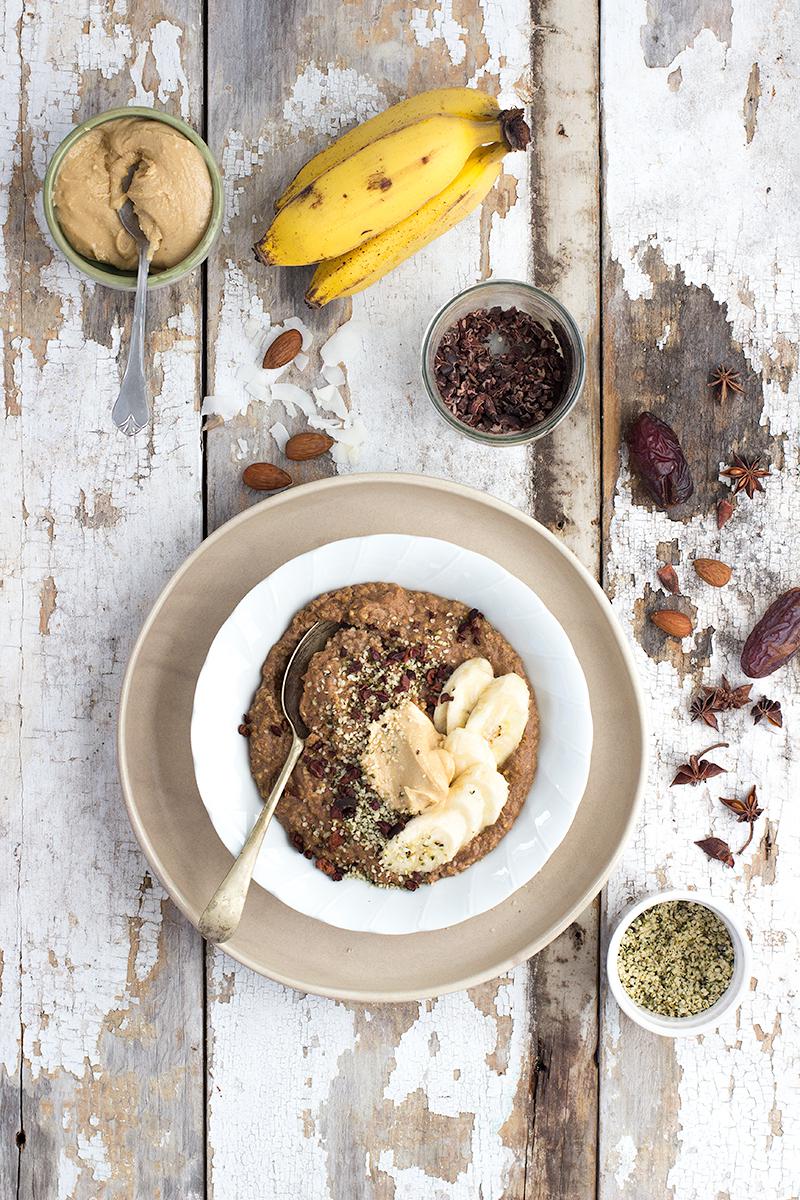 It seems that our bodies and our taste buds know when it times for a change too. I found about 2 -3 weeks ago (along with many of my clients) that I was starting to crave porridge alongside longing for curling up with a warm curry or some slow cooked lamb shanks. I’ve given a few porridges a go already and ate them in a defiant sweaty mess in my kitchen. This time though, the weather gods were on my side.

I woke up this morning ready for my usual slice of Gut Friendly Bread to go in the toaster and I thought – this is porridge weather. I’m making porridge and it will be splendid! I’ve already dropped a few porridge recipes on the website here, my creamy almond milk porridge and barley porridge. This chai-spiced porridge is somewhat similar in its construction, yet celebrates using millet as the grain base (see below in nutritional information for more on millet). 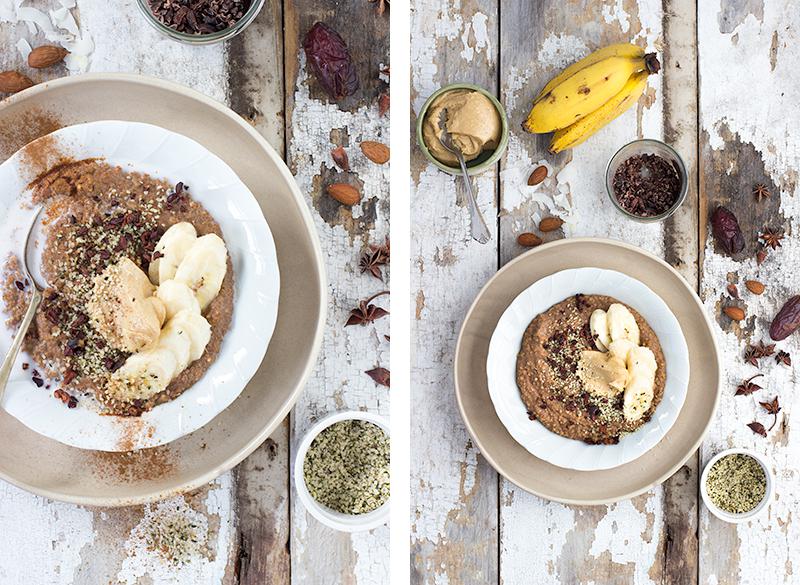 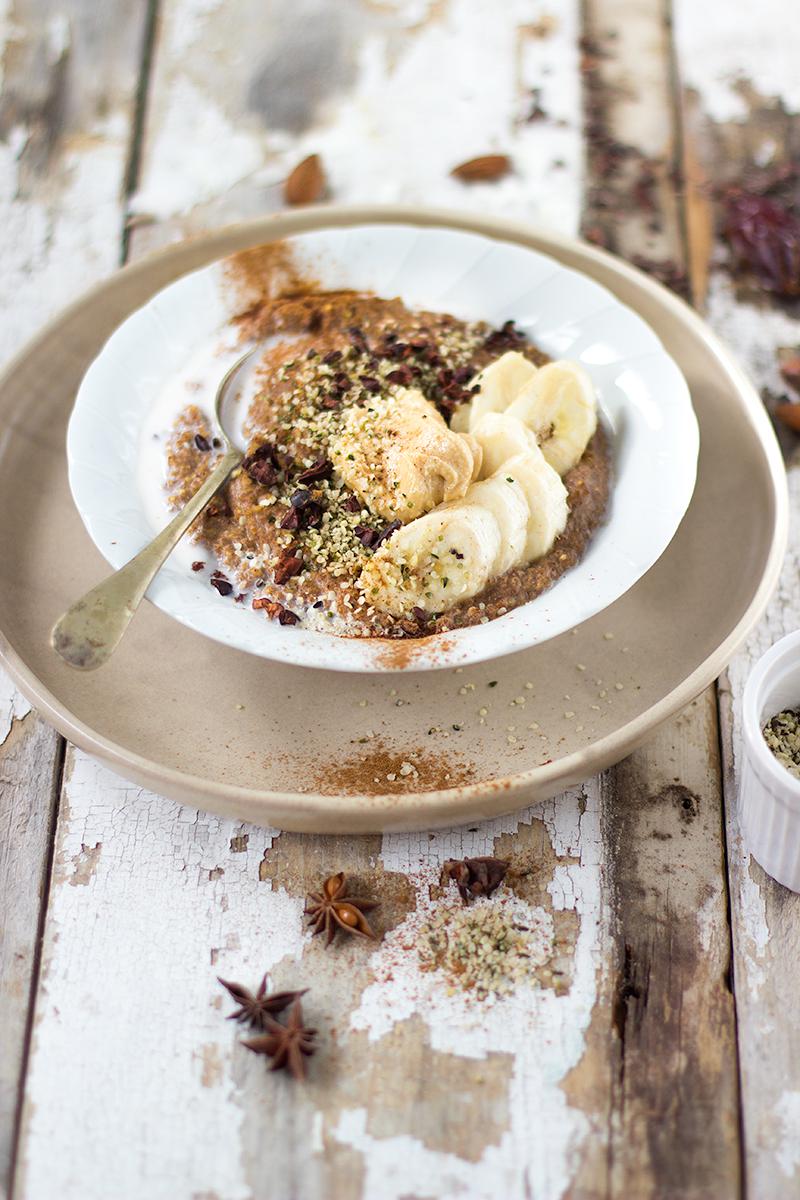 The thing with millet is that it will take longer to cook. If you are after a porridge that is done and dusted in 5 minutes then you better leave this one for a rainy day when you have more time up your sleeve. Of course you could pre make it and have it ready in the fridge to go, but I love the thought of waking and stirring away in the early hours of the morning sipping on my matcha latte. Its cathartic and too often we are in a frantic state to get out the door in the mornings. This porridge physically slows me down, which is not a bad thing at all. 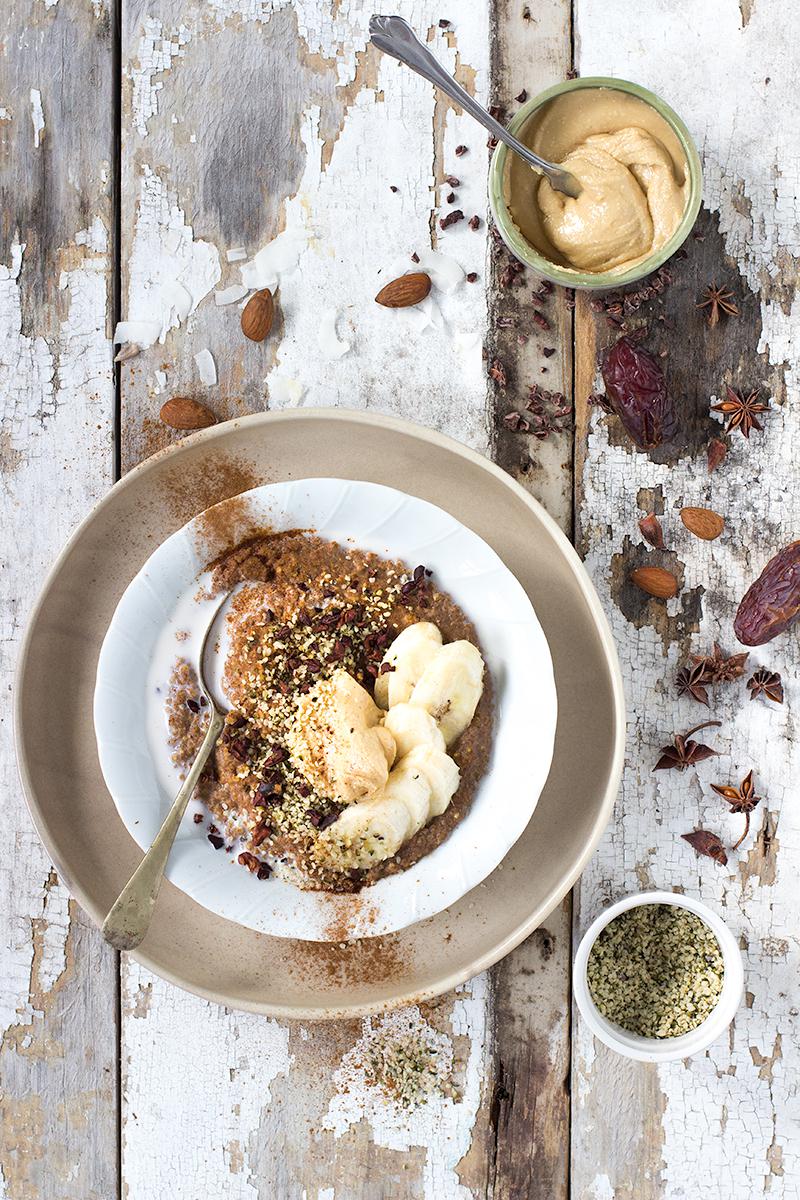 This chai-spiced porridge also uses a combination of so many of my favourite ingredients and flavours. It doesn’t take a genius to realise I love chai, so adding these spices to a thick and creamy porridge is just true love for me. Spices like cinnamon, cloves and star anise have warming properties that support your digestion and also encourage blood flow from a chinese medicine perspective. You could amp this up further with adding turmeric and ginger for a dynamo of warming and anti-inflammatory spices. 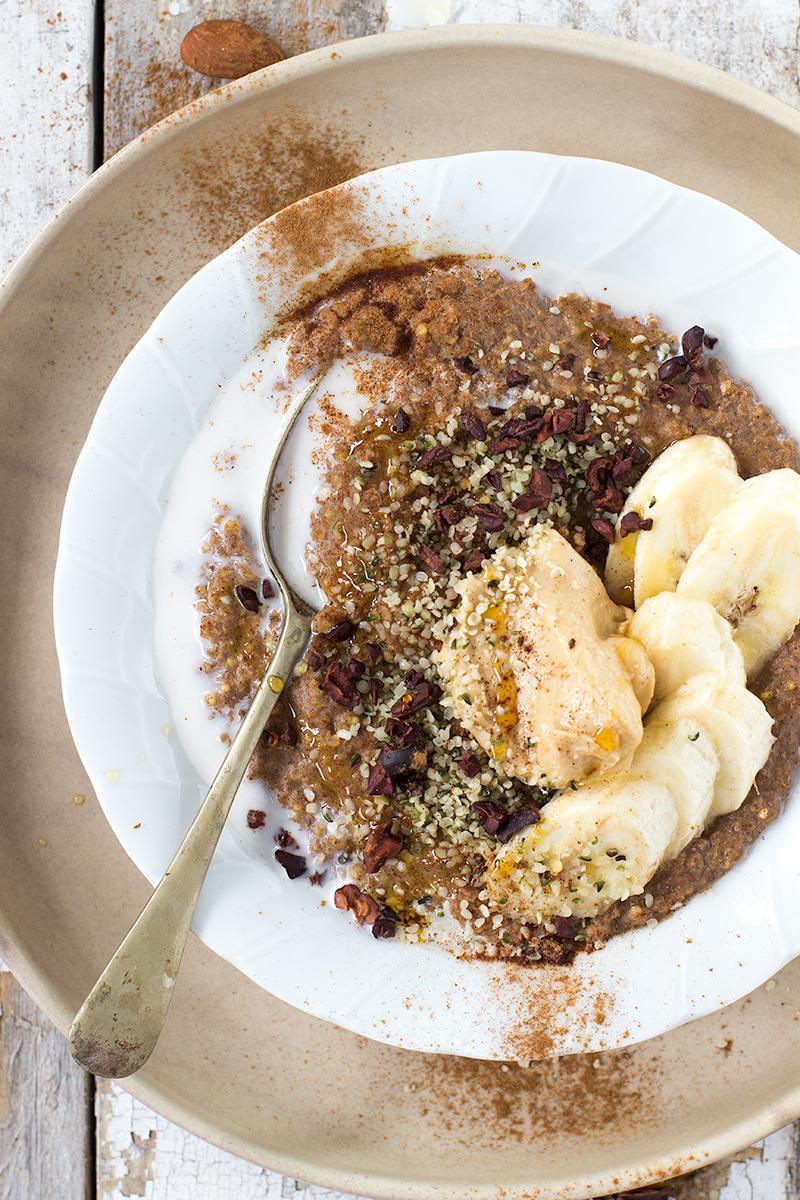 I know it’s only a matter of time now before the cool really sets in. The tell tale sign will be when a breathing lump appears under the doona that meows annoyingly when growled at to ‘get out’. It will bring a time to start shutting bedroom doors during the day to save our sheets from being soiled by a short haired, grubby, cold devon rex. This is the true sign of winter on its way.

*If you want to skip making the fresh almond milk you can simply use packaged almond milk and add spices with the milk directly to the porridge. Just ensure you use ground versions of the spices if doing the recipe this way.

Begin by making your fresh-spiced almond milk. Place the almonds in the blender with the water, cinnamon, vanilla, star anise, cloves and salt and blend till well combined and creamy. You do not need to sieve the almond milk; the pulp will add extra creaminess and flavour.

Heat a saucepan to a medium heat and add in the well-rinsed millet followed by the fresh-spiced almond milk. Bring to the boil and then turn to a simmer, covering with the saucepan lid. Leave the porridge to simmer on a very low heat, stirring often as the millet takes up the milk. This will take around 20 – 25 minutes until the millet is softened.  If it becomes too thick for your liking add a little more water.

Once the porridge is done pour the porridge into two serving bowls. Divide the toppings between the bowls evenly garnishing with the sliced banana, nut butter, hemp seeds, cacao nibs and finish with a drizzle of almond milk and maple syrup if desired. Enjoy while hot and steamy.